This is not a new topic, but I thought I'd tackle it, settling once-and-for-all the debate: Does INTP = Asshole?

Yes, INTPs can be assholes. Now, calm down--this is not as bad as it sounds.


[I find this illustration hilarious for some reason.]

So, the INTP might view himself as honest, straightforward and direct ("I like to get straight to the point, no beating around the bush").

Other people find him blunt, abrasive, cold, aloof and insensitive.

You might think of it as lacking a certain kind of social filter, i.e. there are some things that are okay to think but not okay to say out loud. In front of people.

[Welcome to my world.]

There's a corollary to this: the INTP is usually so hyper-focused on one particular thing that nothing else seems to matter.

It's not that the INTP doesn't care about your feelings. But she is staring so intently at the mark on the wall that everything else has fallen away, including, sadly any sense of tact or human decency.

In the INTP's defense, the insensitivity is not intentionally malicious or meant to cause harm, but of course at this point the intention of the remark is less important than the content.

On the other hand, if you question the competence of an INTP, he may very well react negatively and lash out in anger.

It's that combination of being seemingly insensitive to the feelings of others while also highly sensitive to certain kinds of slights that paints the INTP as kind of a jerk, and a hypocritical one at that.

[Ending on somewhat of a dark note here.] 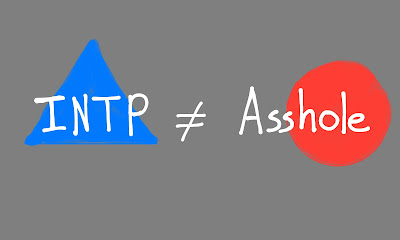 If INTP's were truly assholes, blog posts like this would not exist, because being an asshole implies a sense of entitlement (often blind):


"A person counts as an asshole when, and only when, he systematically allows himself to enjoy special advantages in interpersonal relations out of an entrenched sense of entitlement that immunizes him against the complaints of other people."

If you were really an asshole, you wouldn't devote 753 words to determining your status. You'd be out letting your dog take a crap on someone else's lawn, not a care in the world.

No discussion of INTPs and assholery would be complete without discussing arrogance.

[Some of you are nodding your heads in agreement just a little too vigorously.]

Remember the illustration above? Chances are what other people consider arrogance, the INTP simply considers "being right 99% of the time" or "almost always being the smartest person in the room." I exaggerate, but statements that appear overweening to others generally strike the INTP as just the facts, ma'am.

In their own way, INTPs are truth-tellers. And this can get them into trouble.

So, you're an INTP and someone thinks you're an asshole. Or just plain doesn't like you.

Think about it, did you:

A. Say something that could have been taken the wrong way?
B. Lash out because you felt personally attacked?
C. Have no idea why they don't like you?

If it's one of the first two, apologizing might go a long way. But if it's the third--

At a certain point, I think it's healthy and mature to not take it personally if someone hates your guts.


The best I can do in these situations is confront the person and ask if I've done anything to offend them, and if so, apologize.

But ultimately, how someone feels about me is not up to me. I can call someone out on their passive-aggressive behavior, initiate the "Are we okay?" talk, and say I'm sorry--but that's about the extent of it.

If I could give any advice to any fellow INTPs out there, I would say:

Embrace humility in your interpersonal relationships, BUT run far, far away from shame or anything else trying to convince you that you're defective (you're not).


In conclusion, INTPs can be arrogant, insensitive and abrasive.

But are they assholes?