We've all heard (and in my case, written) about how weird Christians can be about dating.

But I believe it goes much deeper than that.

A couple weeks ago, two different guys messaged me on Facebook after I posted about a project I've been working on.

One of these guys, we'll call him Chuck because I don't know anyone named Chuck, was someone I've had on my DO NOT ENGAGE radar for a long time, ever since I moved to LA five years ago.

You see, we kind of had a thing. Except that this thing was exclusively one-sided. 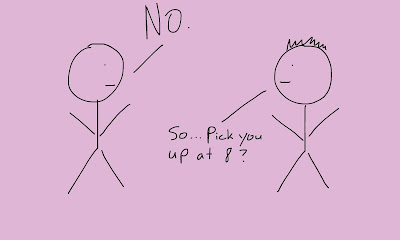 I had just moved to LA and didn't have very many friends, but somehow Chuck was always available to hang out. I can't really remember the first time he hit on me. He was the brother of a close friend, so I assumed he was safe.

You might wonder why I kept hanging out with this guy. I wonder the same thing. Was I leading him on even though I had explicitly stated that I didn't want any kind of romantic relationship with him?

One night he grabbed me suddenly and tried to dip me for a kiss (this after I had just given my semi-tri-annual "just friends" speech). I was shocked and taken aback. He explained that he was taking notes from the movie "Hitch" where the titular character explains that you go half way in for the kiss and then wait for the girl to go the rest of the way.

I'm not sure which was more disconcerting—that this guy was taking notes on dating and romance from a Will Smith/Kevin James comedy or that physical contact bordering on sexual assault was now somehow considered a move that you pull on someone who has just turned you down.

I stopped hanging out with him (finally). And yet still, he would call me, wanting to go to an event that I had posted on Facebook. Or he would text me, referencing a show that I liked and suggesting that we watch it together.

I felt threatened and alone—how could I explain to anyone else, especially my friends, that I felt harassed by the sweetest, gentlest guy in the world?

It took me a long time, but I eventually got angry. How dare he disregard my stated wishes and boundaries. How dare he GRAB ME AND TRY TO KISS ME.

Back to the present: he messaged me on Facebook asking about working on the project together—and I said, "No." He apologized for his immaturity. I said that I didn't think that not taking "No" for an answer was simply "immature." He apologized for not respecting my boundaries, and then...

I kid you not—after I referred to his actions as "more scary than anything else"—he told me I was "beautiful," and wrote, "I never want to take myself out of the running for more." He ended with:

"I will always think of you as a friend, Mulan."

It was too perfect. It wrapped a huge, obnoxiously pink bow on everything.

It proved to me that I could say anything to him, ANYTHING: "F*** you. You disgust me. I hate you. I never want to see you again. I will never, ever date you" and it would not matter one bit. Why?

BECAUSE I DON'T MATTER. I don't even exist to this guy. I am a fantasy, not a real person. I might as well be a two-dimensional drawing from the Disney canon.

So often with Christian men, what I think or feel or desire or say just doesn't matter. All that matters is that he wants me. I'm less a "person" and more a face and a body that he can project his own needs and desires onto.

In the end, I feel strangely justified—because so often women are faulted for "leading him on" or "Obviously, you didn't say 'No' loudly enough or firmly enough for him to get the message."

NO. He violated my boundaries. And it was not my fault.

We whittle women down into finer and finer points—Don't wear that. Smile. But not at the wrong guy—that could get you killed. Don't walk there at that hour. Don't drink. If you must, make sure it's around people that you trust with your life. Don't encourage him. Stop breathing. Why are you breathing? If you would just stop breathing, then he would leave you alone. If you could just—not exist—for a minute. Thanks.
Posted by MT at 6:00 AM